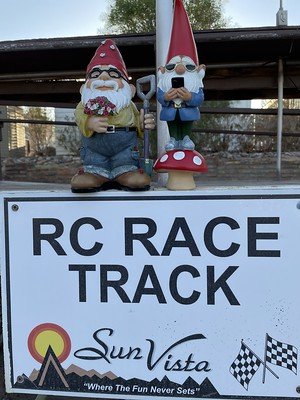 Now that the temps have been falling here in the desert southwest it is time to bust out the RC race car and enjoy the competition in our own back yard! That is what ol Captain Blowdri told us this week. So me and Studley P. thought that we would santer to the back of the resort to take in a little dirt slingin’, some fast RC cars, and hear some of the vocabulary being spewed out of the mouths of all the frustrated racers!

So we hopped a ride with Blowdri in his golf cart and slid on back to the race track this weekend. What we found was that the some racers has returned to Yuma this Fall. There are some still in transition between their summer homes and the friendly confines of Yuma, nonetheless, the racing was intense.

There was something else missing this past weekend. We were expecting to smell the familiar smells of alcohol and burning rubber like any other dirt track would produce. Damn, these scalding ass apes are powered by an electric motor!. So what we heard was this damned high pitch whine as there whizzed by our vantage point! My guess is that their top speed must be at least 50 mph, that is, unless they are crashing with each other!

We, me and Studley P., noticed that the competition level gets intense among the drivers. One thing that we noticed is that many of the drivers were issuing apologies to the other drivers before the cars ever hit the race track! What the heck was that all about? Well, we figured out that the drivers were “pre-aplogizing” for the inevitable crashes, t-bones, cutoffs, and downright running over the other cars that were probably going to cause “heartburn”, anger, loss of the race, or other malfeasance during the morning racing!

Another observation was that it seems that the drivers talk more “smack” than they really may be capable of delivering. Also, it would appear that sometime during the week each driver had made a pit stop at their favorite “Shrink’s office” to get their self esteem reorganized, propped up, re-aligned, and prepared for the “ass ripping” that they will receive from the other drivers come Saturday morning!!!

When the morning race schedule was complete, and the drivers were packing up the cars and gear, each driver was jovial, friendly, and willing to help each other work on their race cars, if needed!

The camradarie is remarkable! We found that to be an oxymoron! But we both have seen stranger things in our previous lives! I am sure that we will have more to report at a later date.

Nevertheless, we can’t wait to watch again next Saturday!