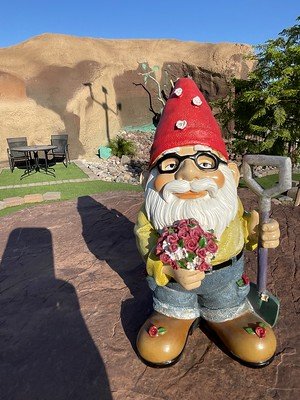 Well I held out as long as I could!

But it was inevitable that this old hippie, aka Studley P. Hungwell, would extricate himself from the Haight-Ashbury district in the City By The Bay, San Francisco, and head on down to the desert southwest for their wonderful winters. Although I must admit that I did pick the wrong time of the year to migrate! I left the Golden Gate Park and it was a balmy 58 degrees! I arrived in Yuma on Aug. 26 to a toasty 115 degrees!

I know it is the desert and it is a dry heat, they say. But as my buddy Chef Carcón told me- it may be dry heat but, then again, so is your kitchen oven! I know that it may appear that this old hippie dude is whining, but I know that I will get over it this winter.

Some may ask why did you migrate from a seemingly groovy place to live and hang out? Well I know that it is not blatantly obvious but I am getting up there in anós, my friends, and I thought that I would go hang out with family. No Captain Blowdri is not related to me! It is the Gnome Dude, aka Mickey Mushroom, he is my second cousin twice removed on my brother from another mother’s side!

So at the beginning of the week I decided to get a backpack, load up all my belongings, and join Mikey Mushroom, aka The Gnome Dude, down at the Hammack Hilton in Yuma, AZ.

I had to weigh all the different modes of transportation that was available to me for my trip. I first thought that I would pull a Peter, Paul, & Mary and “leave on a jet plane”. Then I counted up my savings account and realized that I was significantly short of the price of an airline ticket!

Then I thought that’s ok, I will just drive the 749 miles down there. It will only take about 15 hours. That is a piece of cake, dude! Then I started thinking I don’t own a car. How foolish was that thought?

No problem I will just rent a car and drive that bad boy like I stole it all the way down there to Yuma! What great idea! A wild and crazy road trip is just what I need! Then I realized after some introspective inventory, hell I don’t even have a driver’s license, I a damn gnome! How foolish am I to think that I could rent a car and drive it 749 miles to my new home?

Well after thinking about this more realistically my only option was to wash my hands and polish up my thumbs nails, because the only way I was changing zip codes was by sticking out my thumb and hitching a ride there!

So this past Thursday morning at zero dark thirty I walked down to the Haight Street Art Center and began trying to hitch a ride. The first dude I saw picked me up and took me down south on 101 as far as the San Jose Airport. He worked down there for United Airlines as a “baggage smasher”! Not too long after getting out his car I was picked up by a dude heading into the San Joaquin Valley, Fresno to be exact. Things are rolling now, it is my lucky day!

My next ride was not nearly as interesting. He was a man of very few words, so I decided to plug into some music to occupy my time. For the next four hours it was me and my music, freedom was a highway! Fortunately he got me as far as the intersection of highway 210 and I-10 on the western edge of San Bernardino and the eastern edge of Redlands, CA. After exchanging pleasantries I exited his hot rod and began trying to secure another ride on my journey.

It took a while this time for someone to trust me enough to stop and offer me a ride. But luck was running in my favor still because this dude was heading all the way to El Centro, which is right along my itinerary. Oh lucky me! This dude was a talk-a-holic, which made that 160 mile stretch click off rapidly! We talked about everything from Newton’s Third Law, every action has an equal and opposite reaction, to Law and Order.

The next and final leg of my journey was with a like minded 60’s type hippie dude. Man, did we hit it off! I saw his “Deadhead” sticker as I put my backpack into his trunk. We were both fans of Jimi Hendrix as well as Jerry Garcia, Before I knew it he had pulled up to the gate of my new crib, Sun Vista RV Resort! Now to call my cousin and have him come out to the front gate and grant me entry.

Man it was good to see a friendly face, a long lost second cousintwice removed on my brother from another mother’s side, Mickey Mushroom. Man, he was gushing with excitement as well!

Looking back on my 15 hours of travel, if I had to characterize that day I would say that “Freedom Was A Highway”!

Love, Peace, And Harmony My Brothers And Sisters!