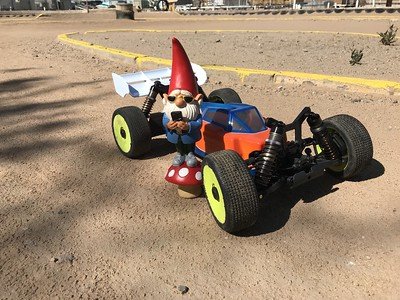 I think that I picked the wrong year for a transplantation! No, I didn’t have any kind of surgery in 2020 to have anything added to or subtracted from my awesome physique! But I did ease out of my comfort zone and slide on down to the deserts southwest for a change in scenery.

Boy was that an eye opener!

Ol Captain Blowdri convinced me to depart the really cool environs of the San Francisco Bay Area for the nice winters of the Sonoran Desert, aka Yuma, AZ. He told me all about the really mild winter temps, the really cool place that he spends his winters, and that we could have lots of fun racing his RC race cars on the really cool race track that he helped build.

Well, I was ready for a change of scenery after spending a half of century hanging out in North Baker Beach, The Haight, Golden Gate Park, and Fisherman’s Warf, jamming with The Grateful Dead, Creedence Clearwater Revival, Jefferson Airplane, and The Jimi Hendrix Experience. Besides the SF music scene had wained in the last couple of decades, and I felt it was a good time to pull a Hank Snow…..that is to do a little “Movin On”!

The first few months after my arrival I found myself giving some much needed support to ol Captain Blowdri, since he was still recovering from a major gut-buster! The gut-buster that ol Blowdri was recovering from is better known as open heart surgery to replace his defective aortic valve, which was a degenerative birth defect. I have since come to know that many of Blowdri’s so called friends knew that there was something very degenerative about him, they just couldn’t put their finger on exactly what it was! Now they know.

Well, when the high temps started descending below the century mark, and a few of the residents made their way back down to their winter homes, we fired up the Fall RC racing schedule. Let me tell you, as the temperatures cooled down, and the “winter visitors” came back, the racing began to heat up! At first Captain Blowdri put his old driver back into the driver seat, since it was a very familiar relationship, and I understand at one time that dude was fearless and fast.

However, somewhere near the end of the Fall Winter Nationals his old driver seemed to be driving erratic, or distracted, or cowardly, I never really could figure it out. Blowdri’s entry just seemed to float like a butterfly, but did not sting like a bee, and continuously hung out in 5th place and lower without ever really being a threat to win races. Blowdri had a very stern one-on-one talk with that dude, even going to the extreme of quarantining him in hopes that one, the driver would dry out and kick his Mad Dog 20/20 habit, and two, be able to “drive it like he stole it”!

Well, in the remaining two races of that race schedule, The Fall Nationals, Blowdri’s hot rod just never was a threat. It was competitive for a lap or two, but was never in a position to take the lead in any of those final couple of races. In fact, that is exactly the place that he finished in points for the Fall Winter Nationals, 5th place. That was not necessarily to the liking of the car owner.

During the off week I stepped up to Captain Blowdri and had a very frank GnomeDude-To-OwnerDude racing talk! I told Blowdri that if his driver wasn’t going get his elbows up, run hard on the cushion, beat and bang with the other cars, then he would never win races in this competition! Furthermore, I made an offer to Blowdri; put me in the seat for just two races and if I can’t give you better finishes than that washed up alcoholic driver that you have been employing, then you can replace me!

Well race fans, we are two weeks into the Winter Fall Nationals racing schedule and my race car/Blowdri’s race car is sitting 2nd in the points! I have put this car in both A Main events and I have been a threat to win each of those races. The other race car owners/race drivers are treating this race team of Captain Blowdri and The GnomeDude with a lot more respect and courtesy this time around!

We shall see just how competitive I can be in this segment of races, but anything is better than his old rundown, beat up, cheap grape consuming, has been that was poured into the seat each and every Saturday morning cause he was more hung over that than a 90 year old’s brassiere!

The new philosophy of this race team “is stand on the gas til you can hear Elvis singing, then just tap the brake lightly once and back on the gas hard”!